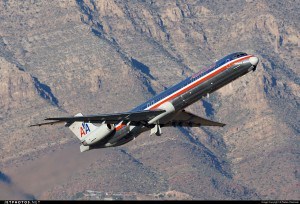 An American Airlines flight to Chicago made an emergency landing Monday because of an allegedly unruly passenger, authorities said.
American Airlines Flight 1284, which departed from Miami, ended up landing in Indianapolis.
The passenger has been identified as Daniela Velez-Reyes by the Indianapolis Airport Authority.
“She was disoriented through the entire flight,” passenger Marian Frendt told ABC station WLS-TV in Chicago. “She started kicking the seat of the passenger in front of her, and he apparently turned around to complain … and she hit him.”
When a flight attendant intervened, Velez-Reyes allegedly grabbed the attendant’s face and kissed her, then punched her in the face, said a different passenger who told WLS that he witnessed the interaction.
Authorities said Velez-Reyes also kicked a police officer while being arrested.
Velez-Reyes was escorted off the plane in flex-cuffs. Passengers filmed the scene as officers helped her into the back of a patrol car.
She was charged with battery with injury, battery without injury, battery of a public safety officer, criminal recklessness, disorderly conduct and disruption of the operation of an aircraft, authorities said.
The arrest report lists that one woman, listed as one of the two victims, suffered an “apparent minor injury” though no further details about the injury were included.
The disruption caused the flight to arrive in Chicago about 90 minutes late.
ABC News