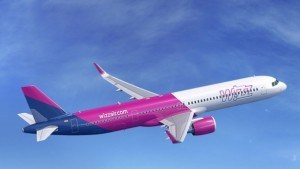 Fast-growing Hungarian low-cost carrier Wizz Air has formalized the memorandum of understanding (MOU) it announced at the Paris Air Show in June to purchase 110 Airbus A321neos.
In a statement released Sept. 11, Wizz Air said the order was worth $13.7 billion at list prices, but said “Airbus has granted significant discounts.” The airline added that it retained its commitment to purchase a further 48 aircraft from Airbus, comprising 21 A320ceos and 27 A321ceos.The first Wizz Air A321ceo aircraft will enter service in November, configured with 230 seats.
“All aircraft under the existing order are scheduled for delivery by 2018, however, under an amendment agreement entered into today (which is conditional on the new Airbus agreement coming into force), 10 A320ceo aircraft currently scheduled for delivery in 2018, under the existing order, will be canceled,” the airline stated.
The new agreement includes the purchase of 110 Airbus A321neos for delivery between 2019 and 2024, Wizz Air said. “These aircraft will enable Wizz Air to renew its existing fleet and provide additional capacity for further growth. Airbus neo aircraft provide additional efficiencies that will enable Wizz Air to offer even lower fares to the market and will ensure Wizz Air maintains its young, efficient, industry leading fleet.”
Of the 110 aircraft to be delivered to Wizz Air under the new Airbus agreement, 51 aircraft will be replacements for aircraft to be returned to lessors or sold between 2019 and 2024.
“The new Airbus agreement also provides for purchase rights for the purchase of an additional 90 A321neo aircraft. These purchase rights can be exercised in four batches by June 2017, June 2018, June 2019 and June 2020, respectively,” Wizz Air said.
The airline said it had also negotiated “a significant amount of flexibility with Airbus” to ensure the aircraft delivery stream matches its operational needs, including the ability to substitute a certain number of A321neos with the same number of A320neos.
The airline has also committed to making an engine selection for the new aircraft by 31 December 2016. Options for the neo are the CFM International LEAP and Pratt & Whitney PW1000 geared turbofan.
“This order will help us to build on our strong market position in Central and Eastern Europe. It also provides significant flexibility to match our fleet to our growth requirements. The new aircraft will enable us to sustain our cost advantage through cabin innovations, the latest engine technology and other efficiency improvements, while enhancing our customer offering and experience.
Airbus is a key partner for us and we believe they have the best aircraft to serve our markets and we are happy to be continuing our longstanding relationship with them,” Wizz Air CEO József Váradi said.
ATW – Air Transport World