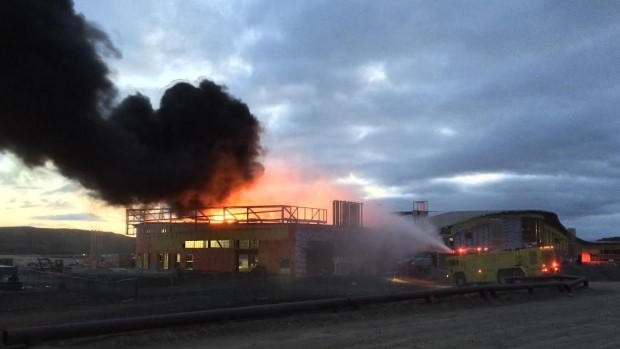 A large fire broke out on the roof of Iqaluit’s new airport terminal building around 7:20 p.m. ET Saturday night sending large plumes of black smoke over the city.
The fire was contained to the roof of the building, which is currently under construction.
There were no injuries, and Iqaluit’s fire chief, Luc Grandmaison, said the smoke posed no risk to the public.
“There’s no danger. If you look at the wind speed tonight, wind dissipation … any smoke is bad. Don’t stand downwind from the smoke. It doesn’t matter what colour it is,” he said.
Fifteen firefighters along with fire crews from the airport extinguished the blaze in about 45 minutes.
“It wasn’t on fire for long, but it was putting out a lot of black smoke,” said Iqaluit Airport manager John Hawkins.
Multiple photos from the scene posted to social media show flames and black smoke coming from the roof of the building.
“It would have been roofing materials, some insulation. So, typically it’s styrenes,” Hawkins said. “That’s not good.”
Hawkins said the building was almost closed in for the winter. He said work on the walls, roof and insulation were complete.
The $300-million airport renovation, including the new terminal, is being done as a public-private partnership. Hawkins said that means Saturday’s fire won’t affect the project’s cost, though would not specualte how it could affect the construction timeline.
Crews will be on stand-by in case the fire flares up. An investigation into the cause will take place Sunday.
CBC News