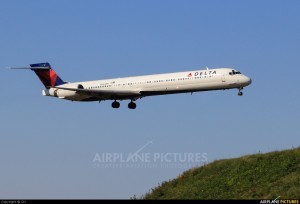 Delta Air Lines Inc. is removing seats from 179 jets to make things less cramped — for flight attendants, not the passengers.
The removal of two or three seats, depending on the aircraft model, reverses some of the carrier’s seat additions of recent years. The action provides more space in the galleys, spokesman Michael Thomas said.
“This is an investment to give our flight attendants the room that they asked for, and in turn so they can provide better customer service,” he said.
The seat reductions are a bit unusual in an industry that has tried to stuff more passengers on board in recent years, in part by introducing sleeker “slimline” seating. Those seats use less padding than traditional models and are shaped differently, letting airlines pack more people in the cabin with little or no change to the spacing between rows.
Three rear seats will be taken out of 69 Airbus Group SE A320 jets currently being flown and from 45 A321s on order, Delta said. The carrier also will nix two apiece in its fleet of 65 McDonnell Douglas MD-90s, which don’t have rear galleys, to provide more storage space, Thomas said.
Delta earlier had boosted seat counts on aircraft including the MD-90 and the A320, with the latter jet also receiving “space-saving galleys,” according to a January 2014 statement.
Southwest Airlines Co., American Airlines Group Inc. and United Continental Holdings Inc. also have added slimline seats in economy class. Boeing Co. last year announced it would build a new variant of its narrow-body 737 Max 8 aircraft with 11 more seats than the model under development.
Bloomberg Business