BHOPAL: A major accident was averted at Dumna airport in Jabalpur when a weekly SpiceJet aircraft skided off the runway while landing, on Friday. All the 49 passengers and 4 crew members who were on board are safe.
The weekly SpiceJet Flight 2458 which takes off from Mumbai at 5.30pm and reaches Jabalpur at 7.25pm was landing when a wild boar came into its way, said sources.
It was then that the pilot had to apply emergency brakes that led to the aircraft skidding off the runway, said sources.
SpiceJet later issued a statement explaining how the pilot of the aircraft managed to avert a major
accident. The statement said, “The skilful and experienced hands of Captain Amartya Basu, who has more than 10,000 hours of flying experience, today helped to avert a major disaster by diverting the aircraft towards the left of the runway to moderate the impact of the event. Damage to the aircraft is still being assessed, however all the 49 passengers and 4 crew members are absolutely safe.”
Spicejet also tweeted on their official handle, “SpiceJet Q-400, flight SG 2458,Mumbai to Jabalpur upon landing, hit a herd of wild boars that had strayed into the runway. Aircraft left the runway to the left. Damage to the aircraft is being assessed. All 49 passengers and 4 crew members are safe.”
No untoward incident was reported and all passengers on board the flight were safe, said airport sources.
SP Jabalpur, Dr Ashish who rushed to the spot on learning about the incident said, “There were 53 passengers in the flight and all are safe.”
The Times of India 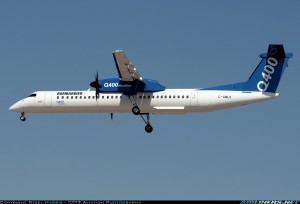 The Bombardier Q400 has gained Brazilian type certification, enabling the aircraft to operate in the South American nation.
Bombardier is trying to break into the large turboprop market in Brazil, which is currently controlled by rival turboprop manufacturer ATR. Brazilian airlines will be able to operate the Q400 in up to an 86-seat configuration. In late 2013, the Canadian manufacturer introduced an extra capacity seating configuration option for the Q400 in which airlines can operate the turboprop aircraft with 86 seats with a seat pitch of 29 inches.
Bombardier is particularly marketing the extra-capacity version of the aircraft to airlines in developing markets; Thailand’s Nok Air was the launch customer for the type.
“Expanding our commercial aircraft presence in the Latin American market is key to our global expansion strategy and obtaining the Q400 aircraft’s type certification [from National Civil Aviation Agency of Brazil] marks an important step in placing aircraft in the region,” Bombardier Commercial Aircraft regional VP-sales for Latin America and the Caribbean Alex Glock said in a statement, adding that the “aircraft will serve the growth-oriented needs of Brazil’s airline industry and prove to be an excellent asset to local operators’ portfolios as they look to expand routes, right-size and develop their networks.”
Canadian Aviation News