Now this is the single best looking livery of any recent election in North-America in my opinion. 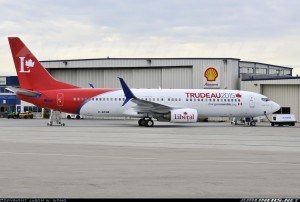 OTTAWA, Canada— Canada’s Liberal leader Justin Trudeau said on the campaign trail Sunday that he would scrap the purchase of F-35s — the apparent frontrunner to replace the nation’s aging fleet of fighter jets.
“We will not buy the F-35 fighter jet,” he told a rally in Halifax ahead of Oct. 19 elections.
Taking Lockheed Martin’s F35 Lightning II Joint Strike Fighters off the table would leave Ottawa with three options: the Eurofighter Typhoon, the Dassault Rafale and Boeing’s Super Hornet.
Canada had widened its multibillion-dollar search for a new fighter jet in 2012 to models other than the F-35 despite having spent 15 years helping the United States and other allies develop it.
Ottawa took the step after the procurement — the largest in Canadian history — came under fire over its spiraling costs and an apparent lack of transparency and competition in the process.
Opening up the process to bidding, however, did not preclude Canada sticking with the F-35, which the government and the military still appear to favor.
F-35 proponents have said the stealth fighter jet is the only one capable of countering threats by advanced militaries.
The ruling Tories had put off making a purchase decision until after the election.
Defense News