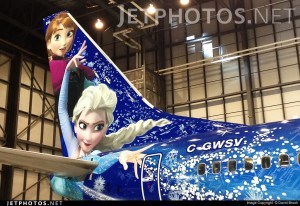 It’s cool to be cold and we are excited to welcome our newest custom-painted aircraft to the WestJet fleet today. The Disney Frozen-themed plane is our second Disney-themed custom paint job and features Anna, Elsa and Olaf from the beloved Disney film Frozen.
WestJetters and Disney Artists and Cast Members collaborated to design the aircraft. Much like when we created the Magic Plane, we wanted the outside of the aircraft to tell a story and we think you’ll agree that it definitely does.
External design features
On the tail of our aircraft, sisters Anna and Elsa celebrate sisterhood and the magic of snow. From the aircraft tail along the fuselage, the magic travels to warm the front of the aircraft where Olaf can be found enjoying a summer day on the beach. In the Disney film Frozen, Olaf dreams of going someplace warm, and now we’ll be taking him to the sunshine with us.
Internal design features
The inside of this cool new plane has a design that matches the outside. In the rear of the aircraft, the overhead bins and headrest covers have a cold theme. As you move toward the middle of the plane, the interior decoration transitions to become warmer, ultimately arriving on a warm, sunny theme at the front of the plane.
Fun facts
-The aircraft was painted in Fort Worth, Texas.
-The paint team included team members from Canada, the United States and Germany. They watched Frozen to get them into the spirit before work began.
-The job took 21 days of 12-hour rotations involving a constant crew of six painters working 24/7.
-The crew used 643.5 litres of paint consisting of 23 colours — five for the umbrella alone.
-Sparkles were added to the paint in sections to add shimmer and shine as the aircraft moves.
-An airbrush artist was brought in to work on details around the sun, water and castle.
-The inside of the aircraft has decals and headrest covers that mimic the cold-to-warm (back-to-front) theme on the outside of the aircraft.
-There are 54 separate overhead bin doors on the aircraft and each has a unique Frozen decal
-Several dozen bagels were consumed during the painting of this aircraft (there weren’t any doughnut stores nearby). The crew drank more than 100 litres of sweet tea.
-The aircraft registration is C-GWSV and the tail number is 810.
While the Disney Frozen-themed plane is inspired by Walt Disney World, it will operate flights throughout our 737 network, not just to Orlando. The aircraft is equipped with our new WestJet Connect inflight entertainment and connectivity system, and while on board this magical plane, guests will be able to enjoy a selection of on-demand Disney videos as part of their inflight experience.