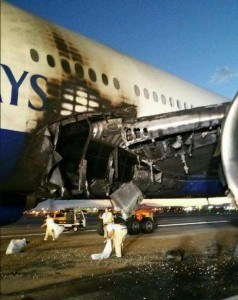 A British Airways Boeing 777-200, registration G-VIIO performing flight BA-2276 from Las Vegas,NV (USA) to London Gatwick,EN (UK) with 157 passengers and 13 crew, was accelerating for takeoff from Las Vegas’ runway 07L when the crew rejected takeoff at low speed and stopped the aircraft about 800 meters/2600 feet down the runway, an arrival to the parallel runway 07R was instructed to go around. After coming to a stop the crew radioed “Mayday, Mayday, need fire services”, tower replied fire services were already on their way, the crew advised they were evacuating, they had a fire, they were evacuating. Seven people received minor injuries in the evacuation, two of them were taken to hospitals. Smoke and flames were seen from the left hand engine (GE90), emergency services responded and put the fire out about 4 minutes after the aircraft rejected takeoff. The aircraft received substantial fire/heat damage to left hand inboard wing and fuselage.
Las Vegas Airport reported flames were spotted at 16:14L (23:14Z), the fire was put out by 16:18L. Two occupants were taken to hospitals for minor injuries, a total of seven needed medical attention.
Passengers reported there was enormeous heat, that appeared to melt down a couple of passenger windows, smoke entered the aircraft. They evacuated down the slides and were taken to the terminal. Later the captain joined the passengers at the terminal and told them, that they had suffered a catastrophic failure of the left hand engine.
The airline reported: “The aircraft, a 777-200 experienced a technical issue as it was preparing for take-off from McCarran International Airport in Las Vegas. Our crew evacuated the aircraft safely and the fire was quickly extinguished by the emergency services at the airport. 157 customers were on board the flight, along with three pilots and 10 cabin crew. A small number of customers and our crew have been taken to hospital.” The passengers were taken to hotels, hotlines have been opened for friends and relatives of those on board.
The runway was closed for 4 hours, the FAA issued ground stops for a number of flights inbound to Las Vegas. 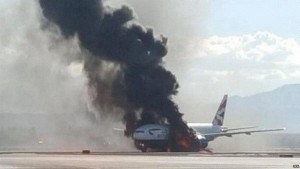 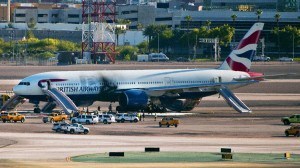 A British Airways flight was evacuated after it caught fire during takeoff on a runway in Las Vegas on Tuesday afternoon, airport officials said.
The London-bound plane caught fire at 4:22 p.m. local time, according to McCarran Airport’s Twitter account.
The aircraft, a 275-seat Boeing 777, was immediately evacuated, the airport said. There were 159 passengers and 13 crew members aboard, according to airport officials, and two people suffered minor injuries.
The plane experienced engine failure while attempting to take off, according to Ian Gregor, a spokesman for the Federal Aviation Administration.
Passengers were evacuated by emergency slides and have been taken back to the terminal by bus, Gregor said.
Gregor could not comment directly on the cause of the fire. Calls to British Airways were not immediately returned.
Los Angeles Times
——-
UPDATE: 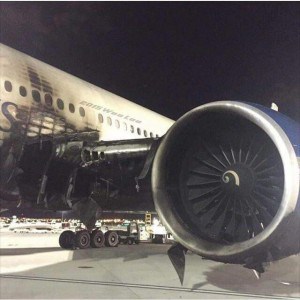