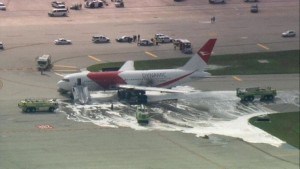 A Dynamic Airways Boeing 767-200, registration N251MY performing flight 2D-405 from Fort Lauderdale,FL (USA) to Caracas (Venezuela), was taxiing for departure holding short of Fort Lauderdale’s runway 28R after contacting tower, when the crew of another aircraft advised there was a massive fuel leak from the left hand engine (JT9D), the 767 crew acknowledged and requested to return to the ramp, when the other crew alerted the engine was now on fire. The 767 was evacuated via slides, emergency services responded and put the fire out using foam reporting the fire was out 7 minutes after the other crew had alerted of the engine fire. There are no reports of injuries, the 767 received substantial damage.
Airport Operations reported a large, very smelly puddle of fuel at taxiway T4 about 700 meters/2300 feet prior to the holding point runway 28R.
Runway 28R was closed, all operations of the airport were switched to runway 28L.
The Aviation Herald