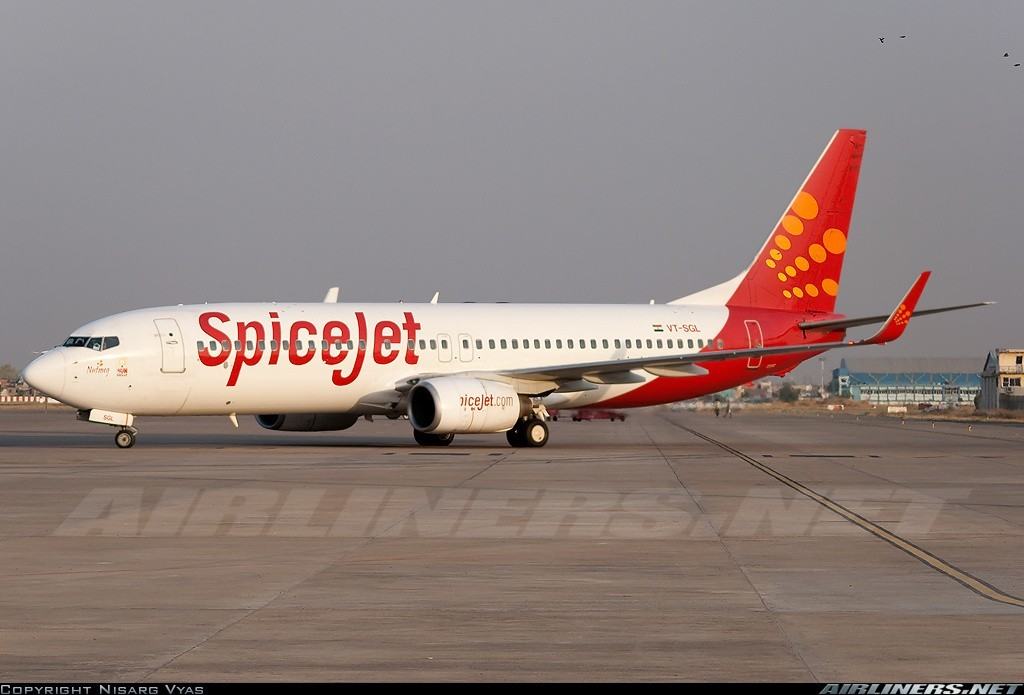 Gurgaon based low fare carrier SpiceJet has made a remarkable comeback from its financial troubles just a little over seven months back. The airline has reported a net profit of Rs 71.8 crore (Rs 718 million) for the first quarter of fiscal year 2015-2016. This is the highest profit for the first quarter ever reported by the airline and the second consecutive profitable quarter.
In the same quarter last fiscal the airline was reeling under a quarterly net loss of Rs 124.1 crore. Today’s result is a whopping Rs 195.9 crore rise. This performance augers well for the airline as it heads in to the second quarter (July to September), traditionally the weakest quarter for the industry.
SpiceJet earned a massive net margin of 6.5% on a revenue base of Rs 1,106.3 crore for the quarter. The carrier was 126.7 crore positive on an EBITDA basis (earnings before interest, taxes, depreciation and amortisation), a 11.5% margin, compared to a loss of Rs 43.1 crore in the same quarter last fiscal. On an EBITDAR basis (EBITDA + rentals), the airline almost doubled its margin to 26% or Rs 287.5 crore compared to a 13.8% EBITDAR margin of Rs 231.2 crore last year.
The airline cited its wet-lease operations, which includes the flight crew and maintenance, and are normally more expensive than dry leases, which involves only leasing the aircraft, along with a weaker rupee as reasons for suppression of profits this quarter. The airline resorted to the more expensive wet lease of aircraft with crew and maintenance to rapidly address the short-term capacity shortage arising out of aircraft non-availability which arose due to lessors taking back aircraft during the airline’s recent financial crises.
SpiceJet recorded an industry leading load factor of 89.8% for the quarter, up 14.8% over the same period last year. Due to the aircraft returns, the airline’s seat capacity declined 33% compared to the same quarter last fiscal. This resulted in revenues decreasing 34% which costs were down 42% relative to same period last year. Revenue per available seat kilometre (RASK) was unchanged, while cost per available seat kilometre (CASK) was down 13% increasing the raw margins of the airline.
Ajay Singh, Chairman, SpiceJet Ltd. said
“We are working hard to build a world class airline again. These results show that we are on the right path,” “This is the second consecutive profitable quarter and I am proud of what we have achieved. But there is still a long way to go. I am confident that the best is still ahead of us. We will continue to focus on growth and on getting operational reliability and on-time performance back to world class standards. We need to strengthen SpiceJet so that it is able to take advantage of the enormous opportunities that will come its way in the coming years,”
Sanjiv Kapoor, Chief Operating Officer said
“The return to profitability in Q4FY15, and the achievement of the best ever Q1 results in our history in Q1FY16, are achievements that even our most hardened naysayers will acknowledge as remarkable” “With the return of SpiceJet’s co-founder Ajay Singh as our Chairman and Managing Director, we have been able to gain market confidence and address many of the seemingly intractable issues that were holding us back earlier across several dimensions, including very importantly on the costs and funding side. I am proud and gratified to have been part of what will be looked upon as a historical turnaround in Indian aviation”,
Kiran Koteshwar, Chief Financial Officer said
“We have made significant improvements in our cash flows and liquidity position, and have been discharging our obligations on time. We are emphatically no longer under financial stress. During this quarter, we have re-inducted an aircraft that had previously been returned and are in discussions to re-induct few more, which reflects renewed lessor confidence in SpiceJet”, said SpiceJet Ltd. “As our performance continues to improve, we will be in a position to gradually pay off historical liabilities as well on terms agreed to with various suppliers, while investing in all of the areas required to secure our future and regain our earlier position in the market”
Bangalore Aviation