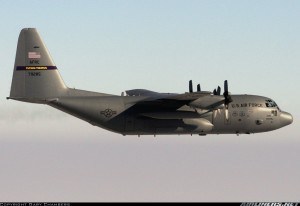 Thirteen people, including six American service members, were killed early Friday when a U.S. C-130 transport plane crashed while taking off from an airport in Afghanistan, a U.S. military official said.
The crash happened shortly after midnight local time (3:19 p.m. ET) at Jalalabad airport, coalition spokesperson U.S. Army Col. Brian Tribus said.
Six of the dead were U.S. service members that were the crew of the aircraft, five were civilian contractors who were passengers, and two were local Afghan civilians who were killed on the ground, the military official said.
The civilian contractors were working with “Resolute Support,” the NATO-led mission to train and advise Afghan security forces. It follows the military mission in Afghanistan after combat operations ended at the end of 2014.
A cause for the crash has not been determined. The military official said there were no reports of hostile activity in the area at the time of the crash.
The C-130 is a four-engine turboprop aircraft used to transport personnel and oversized cargo.
NBC News