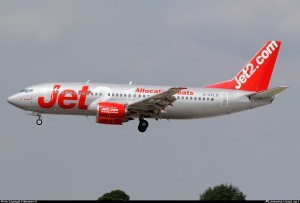 A Jet2.com Boeing 737-300, registration G-CELD performing flight LS-804 from Barcelona,SP (Spain) to Manchester,EN (UK) with 144 passengers, was on approach to Manchester’s runway 23R when the left hand engine (CFM56) ingested a bird and suffered repeated compressor stalls. The crew went around from about 1200 feet and entered a hold shutting the engine down, positioned for another approach and landed safely about 20 minutes later.
Ground observers reported the engine was emitting unusual noise, repeated thuds, smoke and streaks of flame were emitted from the engine.
The Aviation Herald
—
A passenger plane has landed safely at Manchester Airport after flames were reportedly seen coming from an engine.
Passengers said they heard a banging sound as the Jet2 aircraft prepared to land and were were then told to brace for impact.
The flight from Barcelona with 144 people on board, landed 30 minutes late at 14:40 BST.
The pilot called for assistance citing a “technical indication”, the company said.
Passenger Rowan Franks said: “There was a large banging from the engine and vibrations throughout the aircraft and then we could see some flames coming from behind the engine.
“The pilot told us to get into the brace position. I was trying to keep calm and keep my girlfriend calm.
“There were a few panicked faces around and few tears here and there.”
Another holidaymaker Laura Benson said: “There was quite a lot of banging when we were flying, the captain came on saying he wasn’t sure what was happening.
“We were circling for about half an hour. He said we were going to try to land. The crew were going up and down telling us how to get into brace position.
“Everything just flashed before you. We were obviously panicking but (the pilot) sounded calm which was quite reassuring.
“I’m still shaking. I’m happy to be here and my dad is happy he’s got his brandy so it’s fine.”
BBC News