TOKYO — ANA Holdings will order three Airbus A380s as it seeks to expand international service amid a peaking market for domestic flights.
The deal, worth around 150 billion yen ($1.23 billion) based on the market price, would make ANA the first Japanese airline to add the superjumbos to its fleet. The planes are to be introduced in fiscal 2018 in routes to Hawaii and elsewhere.
The double-decker A380 is the world’s largest passenger jet, capable of seating over 500 people. The plane’s carrying capacity reportedly lowers the transportation cost per seat by 15% compared with other jetliners.
The A380 first found a home with Singapore Airlines in 2007 and later was adopted by Germany’s Lufthansa and Emirates, based in the United Arab Emirates.
ANA leads domestically in passenger count on international flights, having outpaced Japan Airlines in 2014. But ANA provides only about 20% of the seats for all Tokyo-Hawaii flights, trailing JAL’s roughly 35% share.
About 1.5 million people fly from Japan to Hawaii in a given year, filling 80-90% of seats per flight on average among all carriers. The A380 can seat more than double the passengers of ANA’s existing aircraft bound for Hawaii, which would help the airline increase its share of travelers.
Domestic rival Skymark Airlines ordered six A380s in 2011, but Airbus canceled the deal in 2014, citing delays in receiving advance payments and other issues. It proved to be a factor in Skymark filing for bankruptcy protection in January 2015 and ANA sponsoring the subsequent rehabilitation. ANA indicated to Airbus the possibility of future orders in return for supporting the Japanese carrier’s turnaround plan during an August vote among creditors.
Nikkei Asian Review

The Dutch government has now granted permission to operate an additional A380 flight at Amsterdam Schiphol, according to reports.
Emirates already operates a twice daily service (the other flight is currently flown by B777-300ER) from the Dutch airport so it means it will be able to both offer a more attractive product for both flights and provide more seats to passengers.
As we have previously reported (see news November 19), the news that Emirates wished to operate a twice daily A380 service at Schiphol did not go down well with both national airline KLM and the Dutch pilots’ union VNV.
But really the opportunities for the Dutch government to intervene and restrict Emirates are limited. Holland favours “open skies” and its aviation treaty with the UAE is a liberal one.
According to Dutch financial newspaper fd.nl, Sharon Dijksma, the State Secretary for Intfrastructure and the Environment emphasises that “Only if it is shown that the companies [airlines] from the UAE do not comply with the provisions of the aviation agreement can we stop the second daily service of the A380.”
The Dutch ruling will allow the carrier to start its second daily A380 service from February 1, 2016.
Business Traveller 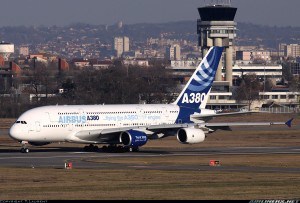 Saudi Arabian Airlines is looking at placing an order for Airbus Group SE’s A380 superjumbo and could also purchase more Boeing Co. 777 wide-body planes or the re-engined and enlarged 777X, Chief Executive Officer Abdul Mohsen Jonaid said in an interview.
The state-owned carrier wants to replace four Boeing 747s and must decide whether to retire aging 777-200s or redeploy them on flights tied to the Hajj pilgrimage, according to Jonaid, who said some orders could come as early as next month’s Dubai air show.
Saudia, as the airline is known, also wants more single-aisle jets, with Airbus’s A320, either the current version or upgraded Neo, and Boeing 737 Max in the running, the CEO said. It aims to swell the overall fleet to 200 planes by 2020 from 119 now in order to add flights at the new Jeddah airport, which opens in 2017, and is also examining the case for establishing discount operations.
“The low-cost-carrier model is something we’re studying,” Jonaid said at an industry conference in Dubai, where the interview took place. A startup would compete with independent Saudi carrier Flynas LCC, which has been offering no-frills flights since 2007.
Saudia already has 50 Airbus planes on order, comprising 30 current-version A320s and 20 A330-300 wide-bodies in the latest high-capacity layout. The company is also retiring Embraer SA 170 regional jets, of which there are 15 in the fleet, though hasn’t decided what kind of planes will replace them, according to Jonaid.
Bloomberg Business