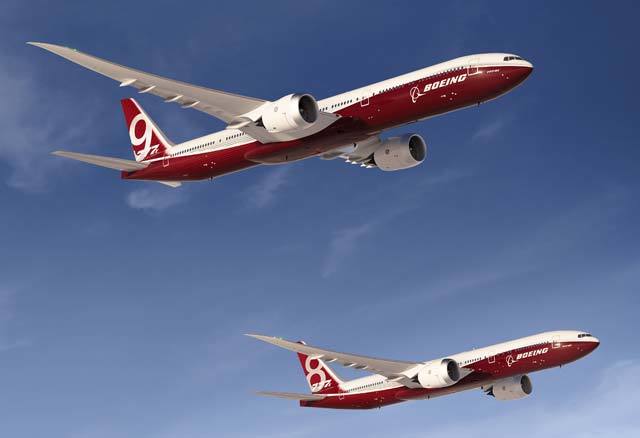 Boeing has formally dropped the ‘X’ suffix from its individual stretched 777 variants, although it will retain it for the overall family.
The US airframer is officially referring to the variants as the 777-8 and the 777-9, the company said during the Dubai air show.
But the combined family, it adds, will still be known as the 777X.
Large-scale models of the aircraft on display in Dubai feature the amended designation on the nose of the aircraft.
The change brings the branding of the long-haul twinjets into line with those of Boeing’s 787 family and the 747-8.
Boeing is intending to put the 777-9 into service in 2020 with the 777-8 following in 2022.
Flight Global 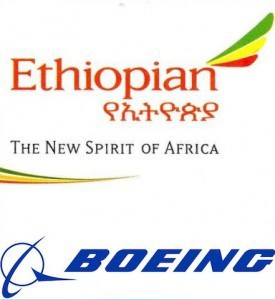 Ethiopian Airlines plans to place an order for Boeing Co. 777X long-range jetliners before the end of the year, the East African carrier’s chief executive said.
The airline could buy as many as 15 to 20 of Boeing’s newest airplanes after also considering the purchase of Airbus Group SE’s A350-1000 widebody, Tewolde Gebremariam said in an interview on Wednesday. The deal would have a value of $7.4 billion at list price, though buyers typically get discounts.
The Boeing plane was deemed more suited to operations from the airline’s high-altitude hub in Addis Ababa, Mr. Gebremariam said. Taking off at high altitudes and in hot weather can put a strain on aircraft performance.
The new planes, due for delivery after 2020, would replace 10 older 777 twin-engine planes and provide for growth, he said.
Boeing is developing two versions of its new long-haul plane, one that would seat around 400 passengers and a lower-capacity, ultra-long-range model dubbed the 777-8. Mr. Gebremariam said Ethiopian was opting for the lower-capacity plane that better suits Addis Ababa operations.
Ethiopian has been on a steady expansion path despite sometimes difficult market conditions. The carrier last year warned the Ebola outbreak in Africa had hit demand even though the affected regions were far from Ethiopia. In the end, the financial pain proved less dramatic, Mr. Gebremariam said, with the airline delivering a $175 million record profit at the end of its financial year in June.
This year the airline is grappling with the impact of low oil prices. Though the decline in fuel cost is a boon to the carrier by lowering operating costs, demand in African oil-exporting markets such as Nigeria and Angola has been hit, the airline chief executive said. What the impact on the full-year results may be is too early to determine, he said.
Even so, the carrier plans to introduce about 10 new aircraft this fiscal year, including the first two Airbus A350-900 widebodies next Spring. It also is adding a pair of 777 freighters and Dreamliners, he said.
Mr. Gebremariam this week told The Wall Street Journal the airline had to scramble to secure loans for a Boeing 787 plane delivery because it lacked a financing guarantee from the U.S. Export-Import Bank. Congressional Republicans effectively shut down the U.S. Ex-Im Bank by failing to reauthorize the agency at the end of June in a clash over spending priorities.
Mr. Gebremariam said the situation didn’t affect the carrier’s decision to buy the 777X from Boeing because delivery financing for those planes is still years away.
The Wall Street Journal