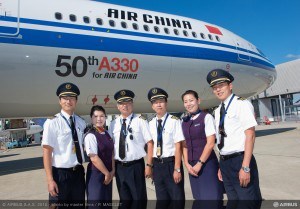 China’s flag carrier Air China has taken delivery of its 50th A330 in Toulouse, France. The aircraft, an A330-300 is the first 242 tonnes maximum take-off-weight (MTOW) version to be operated by a Chinese airline. The increased MTOW allows airlines to operate longer range at improved operating costs.
Displaying a special livery to celebrate the “50th A330 for Air China”, the aircraft is configured with a three class cabin layout (30 business, 16 premium economy and 255 economy)
“We congratulate Air China on the milestone of receiving its 50th A330 and we express our gratitude for the confidence shown in the A330,” said Eric Chen, President Airbus China. “With one of the world’s largest A330 fleets, Air China is already benefiting from the aircraft’s lower operating costs, proven reliability and great passenger appeal. As always, we will provide strong customer support to Air China.”
Based in Beijing, Air China serves today’s most important routes. Air China’s started operating the A330 in 2006 and has become the airline’s benchmark wide-body aircraft.
Air China has one of the world’s largest A330 fleets providing the airline with maximum versatility and support for its rapid growth on domestic and international routes. The A330s including Air China’s A320 fleet are deployed on the airlines’ most demanding routes requiring superior performance aircraft to serve high altitude airports in the south west of the country.
The 242 tonnes A330 is the platform for the future A330neo, and is a concrete example of Airbus’ incremental innovation strategy. Thanks to the latest engine improvements, and an aerodynamics, the A330 with 242 tonnes MTOW offers an extended range of up to 500 nautical miles and up to two percent reduced fuel consumption.
The A330 is one of the most popular wide-body aircraft and has won over 1,500 orders, with over 1,200 delivered to some 110 operators worldwide. Offering the lowest operating costs in its category, and thanks to the continuous investment and introduction of innovations, the A330 is the most profitable and best performing aircraft in its class, with an average operational reliability of 99.4 percent.
Airbus