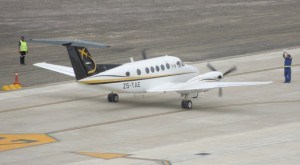 Cape Town – The landing of a Beechcraft King Air 200 aircraft on the Island of St Helen has signaled the end of an era.
St Helena Island Tourism has confirmed that the historic flight landed at 13:50 GMT at St Helena’s new Airport on Tuesday 15 September.
The plane from South African TAB Charters took off on Monday, making its way to Ondangwa, Namibia, then onwards to Namibé on the Angolan coast – performing a series of calibration flights before making the epic first landing at Prosperous Bay airport.
Stepping out of the aircraft, Captain Grant Brighton said, “It feels fantastic and we’re privileged to have flown the first plane to land on St Helena and to be part of your wonderful project.
“The trip over was good. It was interesting landing here, a bit windy on the threshold but a terrific runway, surface, Airport and facility.”
Watching the landing – together with numerous residents at various vantage points – Councillor Lawson Henry said, “First of all this is quite emotional – we’ve waited so long for this moment and it has finally happened. This is history in the making and we’re a part of it.”
The government of Saint Helena announced in March that it was in negotiations with Comair to fly once a week from Johannesburg to the new airport due to be fully operation by February 2016. The flight on the 138-seat Boeing 737 will take four and half hours – in stark contrast to the five days it currently takes on an irregular boat service from Cape Town.
Greeting the crew on the Airport Apron, Governor Mark Capes said, “Today we witnessed an event that will feature prominently in the history of this Island. For the Airport project another important piece of the jigsaw has slotted firmly into place.
“When we launched this work almost four years ago, such were the many obstacles to overcome that there were those who doubted that it would succeed and yet, behold, a plane has landed at St Helena Airport.”
The island has been served by the world’s last regular mail ship and by cargo ships that sometimes anchor there, but the journey took a week from Cape Town and meant that “Saints” have not had regular contact with their relatives in SA, many of whom live in Pietermaritzburg.
The island’s isolation made it a perfect prison, and Britain sent Napoleon Bonaparte there after his defeat in the early 1800s, as well as thousands of captives from the Boer War, and Zulu King Dinuzulu kaCetshwayo.
Hundreds of the island’s 5 000 inhabitants were reportedly at the airport to witness the end to the island’s lost-in-time isolation.
Traveller24