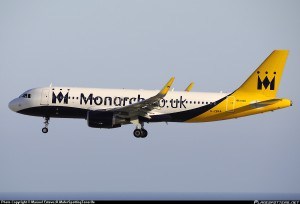 Police are investigating after a passenger on a packed plane from Birmingham allegedly started two fires in mid-air.
The West Midlands force said the blazes were believed to have been “deliberately started” on a Monarch service to the Egyptian holiday resort of Sharm El Sheikh.
The flames were extinguished by cabin crew and police in Egypt were waiting for the A321 aircraft – carrying 201 passengers – when it touched down on August 27.
But the plane was left unserviceable – leaving holidaymakers due to return to Birmingham on the liner stranded for almost 24 hours while a replacement was despatched.
West Midlands Police said no arrests had been made and investigations continued, although eyewitness accounts suggested a suspect was questioned on arrival in Egypt.
Passengers heading back to Birmingham were put up in a hotel as their wait dragged on.
One, Tarek Mohammed, previously told the Mail: “We were not told our flight was cancelled until 20 minutes after take-off time.
“There were no official representatives from Monarch.
“Passengers were given each others’ personal information and were asked to sort out the chaos.
“There are 200 disappointed Monarch passengers.”
But a second said: “The plane was unserviceable because a man set fire to onboard toilets deliberately while also smoking and abusing the cabin crew, terrifying crew and passengers.”
She said the crew deserved praise for having to deal with the “idiot” in mid-flight and that, even while being escorted away, he “showed no remorse and verbally abused the passengers whose flight was cancelled”.
The passenger said the delayed travellers were put up in a “lush luxury hotel” and it “wasn’t entirely Monarch’s fault”.
A West Midlands Police spokeswoman said: “We have launched an investigation after two small fires are believed to have been deliberately started on a Birmingham flight bound for Egypt.
“The fires were contained and extinguished by staff aboard the Monarch flight from Birmingham to Sharm El Sheikh and no-one was injured.
“Officers from the Airport Policing Unit continue to investigate the circumstances around the incidents.”
A Monarch Airlines spokeswoman added: “The A321 aircraft, which was carrying 201 passengers and seven
crew landed safely in Sharm El Sheikh where local police were in attendance.
“UK authorities have been notified and are dealing with the matter.
“As the alleged incident is the subject of a police investigation, we are not in a position to comment further.”
Birmingham Mail