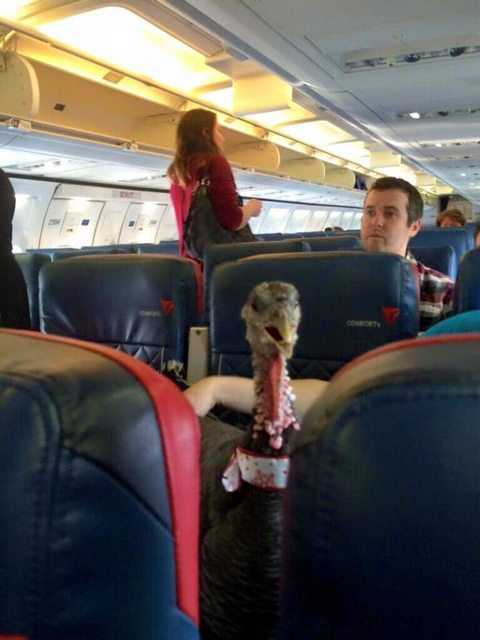 If you think that air travel has gone to the birds, it has -literally.
We’re talkin’ turkey, as in that big Thanksgiving bird, one of which recently was spotted aboard a Delta flight acting as a “support animal,” and that’s causing a flap over how passengers are using, and abusing, comfort animal rules.
So how can a turkey get on a plane? Simple. The passenger provided proper documentation proving the fowl was indeed their emotional support animal, so Delta let the bird on board, and even gave it its own seat.
Reddit user biggestlittlepickle posted the picture, saying that his neighbor, a flight attendant, took this snapshot of the poultry on a plane. unclelimpy, another Reddit user who is friends with the Delta pilot on that flight, followed with another shot of the turkey receiving VIP treatment as it was rolled through the airport on a wheelchair. It even looks like it was enjoying the ride.
Turkeys aren’t the only animals used as emotional support animals on flights. Horses, pigs and–yes, dogs are regularly used.
In 1986, Congress passed the Air Carrier Access Act, allowing service animals to fly on planes and ensuring they can’t be removed simply on the grounds that other passengers object. That turkey, or other emotional support animals, requires documentation from a mental health professional. It can’t walk about the cabin and can’t do their business during the flight (after 8 hours the animal’s owner must plan for the clean disposal of waste), something that must be a written guarantee from the human passenger. They also can’t block aisles or take up seats near the emergency doors.
FOX News