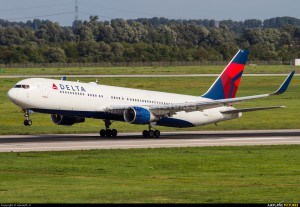 Delta Air Lines Inc. is planning an unspecified number of job cuts among its 10,000 management and salaried employees in a move to boost productivity.
The reductions will affect support roles such as human resources and communications, not front-line workers on planes, spokeswoman Ashley Black said Friday in a telephone interview. The moves may come in locations worldwide, including Delta’s headquarters in Atlanta, said Black, who wouldn’t elaborate on specifics of the dismissals.
Delta and its U.S. peers remain highly profitable even as they reap less revenue from each seat flown a mile, an industry benchmark. The carrier probably will report record third-quarter earnings excluding some items of $1.3 billion, according to analysts’ estimates compiled by Bloomberg. That release is set for Oct. 14.
“We must continue to look for ways to improve productivity and stay nimble particularly given that revenue has declined this year,” Black said in a statement. “Over the course of the next few months, Delta will reduce some salaried positions while continuing to hire flight attendants, pilots, reservations specialists and other front-line employees.”
Delta announced on Sept. 16 that office staff, ground crews and flight attendants would receive a 14.5 percent pay raise effective Dec. 1, although it was offset partly by a reduction in future profit-sharing payments.
Industry newsletter PlaneBusiness.com reported earlier Friday that job cuts were under way at Delta.
Bloomberg Business