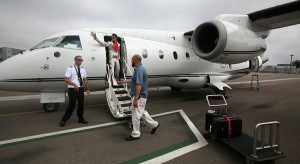 Nonstop air service between Carlsbad and Las Vegas has abruptly ended, a little more than a month after BizAir Shuttle debuted the new flights.
McClellan-Palomar Airport Manager Olivier Brackett confirmed Thursday that it had been advised a day earlier by the airline that it was ceasing all operations. The cancellation of flights to Vegas follows an earlier decision in August by BizAir to end its short-lived, twice-daily flights to Los Angeles International Airport.
BizAir had been offering nonstop service between Carlsbad and Las Vegas three times a week on Thursdays, Fridays and Sundays, and had flown its last flight on Sunday.
“Demand for the Los Angeles flights was very poor,” Brackett said. “The demand for Las Vegas was better, but I guess it just wasn’t enough to sustain it. It’s very unfortunate for the public because we get a lot of phone calls asking for service to Vegas.”
Officials with BizAir, a public charter operator, did not respond to requests Thursday for comment. Its website continues to advertise nonstop flights to Las Vegas, with fares starting at $99 one way, but they are unavailable. At the time BizAir made its June announcement of the new air service, Ricardo Gomez, director of operations and development, said the airline was “excited to bring the people of Carlsbad our tradition of convenience and uncompromising service with no extra fees.”
Chris Jones, a spokesman for McCarran International Airport in Las Vegas, said that BizAir had informed its airport ground handler only that it was canceling flights scheduled for Thursday, Friday and Sunday.
“Originally they had told us they were going to begin service July 6 and initially it would be daily service, but by the 30th, it had gone to three times a week,” Jones said.
Carlsbad resident Erik Staley had booked a flight to Vegas for a late October leisure trip but received an email Thursday from BizAir that it was refunding his booking because it was canceling the flights.
“We have the need for that (air service) because there are those of us in Carlsbad who don’t like the sometimes difficult drive to San Diego where the parking has become more expensive,” said Staley, who had paid $169 each way for the flights. “I’m willing to pay a little more to fly out of Palomar which is 5, 10 minutes away from where I live.”
BizAir’s initial service to Los Angeles had been intended to replace flights formerly operated by SkyWest, which had been offering the commuter service since 1998. They were eliminated as the airline moved to a new fleet of jets that could not land on the airport’s short runway.
The San Diego Union-Tribune