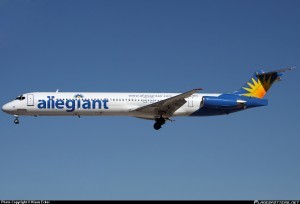 Las Vegas, NV (KTNV) – An Allegiant Air plane engine caught fire Sunday afternoon at McCarran International Airport.
Around 1:20 p.m., Flight 516 was departing to Fresno, Calif., when officials reported a right engine fire while on the ground.
The flight was scheduled to leave at 12:55 p.m. with 160 passengers and six crew members. During the takeoff, Allegiant officials reported there were indications of a mechanical issue and the captain aborted the takeoff. Officials are continuing to investigate the issue.
Passengers were bussed to the terminal for another flight that was expected to leave at 4:05 p.m..
A British Airways engine caught fire last month as it was departing from McCarran. 27 people were injured, mostly minor.
ABC 13 Action News

LAS VEGAS, Nev. (KFSN) —
Authorities are investigating reports of an engine fire on a flight to Fresno.
Passenger Mike Scott captured the video on the tarmac at McCarran International Airport in Las Vegas.
The video shows fire crews spraying water on the Allegiant Airlines jet while a flight attendant gives evacuation instructions on the intercom.
The Clark County Fire Department says a small fire was noticed in the engine compartment, but Allegiant is only calling it a mechanical issue.
Passengers were escorted off the plane and put on buses to the terminal for another flight.
We’re told they also received $50 vouchers.
No one was injured during this incident.
ABC 30