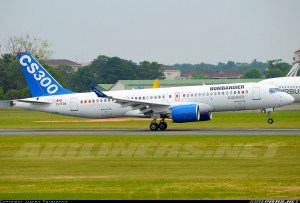 Airbus (AIR.PA) on Tuesday called off talks with Bombardier (BBDb.TO) over propping up the troubled CSeries jet, leaving the Canadian plane maker facing dwindling options to keep alive its dream of competing in the aerospace big league.
The latest blow to Bombardier, which has been trying to shore up its shrinking cash reserves for months, came after Reuters reported exclusively that Bombardier had made an offer to Airbus.
Both companies acknowledged that talks had taken place. A person familiar with the situation said Airbus had ended the talks shortly after they became public.
Under the proposed tie-up, Airbus would have helped Bombardier complete development of the troubled aircraft in exchange for a controlling stake in the program, effectively ending Bombardier’s independent efforts to break into the lower end of the global airplane market dominated by Airbus and Boeing (BA.N).
Bombardier is likely to take a strategic pause and regroup after the sudden end to what some executives had seen as a promising possibility, according to one source.
Among the options were reviving contacts with Chinese investors, and potentially Boeing (BA.N), as well as a renewed drive to sell stakes in the company’s rail and business jet units, the source said.
Boeing enjoys closer relations with Bombardier’s arch-rival Embraer (EMBR3.SA) of Brazil, and is seen as less likely to be interested in any tie-up with Bombardier.
Bombardier shares jumped 13 percent on the Toronto Stock Exchange immediately after Reuters reported the approach, ending the day up 15 percent at C$1.77. The shares are still worth less than a quarter of their value in July 2008, when Bombardier officially launched the CSeries jet.
After the report, Airbus confirmed that it had been exploring business opportunities with Bombardier but that such discussions were no longer being pursued.
Bombardier then confirmed it had held talks with Airbus about “certain business opportunities,” but
those discussions were no longer under way. It said it would continue to “explore initiatives, such as a potential participation in industry consolidation” but gave no further details.
The Montreal-based company, which has so far received a total of 243 firm orders for the jet, was unable to win a single order at the Paris airshow in June and is still short of its target of 300 firm orders by the time the aircraft enters service, set for 2016.
Even for an industry prone to long delays and cost overruns, the development of the CSeries has been rocky.
The project has battered Bombardier’s balance sheet. As of June 30, Bombardier had $9 billion in long-term debt and $3.1 billion in cash on hand, after burning through some $808 million in free cash flow in the quarter.
Desjardins analyst Benoit Poirier said investors would question why Bombardier would sell a majority stake in the CSeries just months before first delivery, given that much of the investments had been made.
“The willingness to sell a majority stake to Airbus with a minimal amount of cash could reflect management’s increased concern for the company’s financial position,” he wrote in a note.
DEFENSIVE APPEAL
The proposal came as the CSeries faces the most vulnerable phase of its development: after huge one-off costs but before revenues from deliveries, and without the cushion of airline deposits that would come with a fatter order book.
The 110-130-seat CSeries jet competes against the smallest models of Airbus and Boeing – part of the A320 and 737 families, respectively – using a lightweight design and new engines from Pratt & Whitney, part of United Technologies Corp. (UTX.N).
Airbus and Boeing have booked a combined 7,000 orders for their latest versions of those medium-haul jets.
Although Bombardier and Airbus have clashed in the jet market, sources said a deal could have had merits for both sides.
Airbus would effectively have been buying a fully developed plane, which its manufacturer says is exceeding performance targets, at a discount to its development cost. And Bombardier would have gained the support it needs to complete its biggest ever plane, and benefited from the powerful Airbus sales machine led by John Leahy, who recently conceded that Bombardier had a “nice little plane”.
Both sides could have benefited from some cost savings in combined supply chain management and procurement.
Any deal would have also carried defensive appeal to Airbus by keeping the CSeries away from China, a long-term competitor with deep pockets.
One source told Reuters that Bombardier had also approached an unspecified Chinese buyer about acquiring a stake in the CSeries, but those discussions ended three to four weeks ago.
Bombardier is also exploring the sale of stakes in other units or a possible cash injection by Quebec’s public pension fund manager, sources said last week.
It is also boosting efforts to generate orders for the CSeries, after refusing under a previous management to offer steep enough discounts, financiers said in Europe on Tuesday.
Reuters