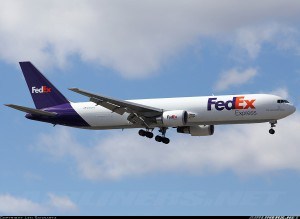 Boeing announced internally Wednesday it will boost production of its 767 jet in Everett in response to demand for the freighter model, after a big order from FedEx in July.
According to a person with knowledge of the program, Boeing plans to add about 150 jobs in the next couple years to the 767 workforce of roughly 2,000 to 2,500 assembly mechanics.
Boeing makes 18 of the widebody twinjets per year now, and had earlier announced it would move up to 2 jets per month, or 24 per year, early in 2016. The memo sent Wednesday says the rate will rise in the fourth quarter of 2017 to 2.5 jets per month, or 30 jets per year.
“The 767 has a very healthy backlog through the mid part of the next decade,” said Brad Zaback, vice president and general manager of the 767 program. “We are confident the market will support a long-term future for the 767.”
In July, FedEx ordered 50 of the aircraft, to be delivered from 2017 through 2023. It also negotiated options to purchase an additional 50.
Boeing spokeswoman Karen Crabtree said there are more ongoing sales campaigns for the 767 commercial freighter.
The surge in freighter sales bucks the trend of a prolonged slump in world air-cargo demand that grew worse recently as emerging economies slowed.
Tony Tyler, chief executive of the International Air Transport Association (IATA), said last week that “the combination of China’s continued shift toward domestic markets, wider weakness in emerging markets and slowing global trade indicates that it will continue to be a rough ride for air cargo in the months to come.”
However, Bob Dahl, managing director of Seattle-based consultancy Air Cargo Management Group, said FedEx thrives in a part of that market that is still growing: international, express, door-to-door deliveries.
And he said that even in times of slow growth, a carrier may choose to upgrade the efficiency of its fleet. For that purpose, the 767s, as “end-of-the-line” airplanes in the final years of production, are available relatively cheaply.
A person with knowledge of the matter said Boeing is negotiating with FedEx rival UPS for another large 767 order.
And Dahl said there are rumors a Chinese express-cargo carrier is considering a move into the widebody market, with the 767 as a likely candidate.
“There are customers out there,” he said.
Boeing delivered the first 767 commercial freighter to UPS in 1995. It delivered the 100th model to FedEx in August.
In addition to the commercial freighter model, Boeing is building the 767-based Air Force refueling tanker on the same assembly line. By 2017, roughly one of the 2.5 jets delivered per month should be a tanker.
Though that program has had multiple delays, the first flight of the tanker is expected in October. Boeing will then have to ramp up tanker production to meet the Air Force requirement of delivering the first 18 by August 2017.
The Seattle Times