New rules accumulation and spending miles … As of next year, Air France-KLM Flying Blue will review background fills, its loyalty program, which dates from 2005.
The 12 million members of Flying Blue from next year should discover in detail the new rules on which its teams work with Frederic Kahane, the set of director of loyalty to Air France-KLM also Transavia, Hop , Tarom, Kenya Airways and Air Calin. The latter has unveiled some of the tracks already and already validated daily Les Echos. We learn that this reform will be spread over 24 months and meets a double objective: “to improve greatly the satisfaction index, maintaining the economic balance of the program.” Do much better without it costing the company more to the equation is somewhat complicated.
The company initially committed to simplifying the rules for accumulation of miles. It intends to build on this fact that Delta Air Lines. Since 1 January 2015, the faithful passengers of the American company no longer receive miles based on the distance traveled but just the ticket price (excluding tax). Similarly to change status, in addition to a minimum number of flights, must now have spent a minimum amount each year with the company. What further promote the most profitable passengers.
Bad news for Silver cards
It is unclear whether Air France will resume the letter that system or just be inspired, but everything suggests that passengers traveling only personally will have more trouble staying Gold status allowing free access to lounges the company and more broadly in the lounges of the Skyteam alliance.
Air France is also committed to reserve more seats in its planes to those traveling through cheaper tickets “premium” tickets purchased with their miles. The boss of Flying Blue ensures that its program distributes each day to its most loyal customers the equivalent of 1,000 round-trip tickets from Paris to New York. Without specifying all the new conditions of access to its ticketing “Prime”, Frederic Kahane ensures, for example, it takes 20% less miles for European flights. And those who did not accumulate enough can also use them to book hotel nights and pay the bill directly to miles on a dedicated website.
The few thousand customers “Platinum” – the most difficult status to achieve – will be more pampered. They will be entitled to a phone line that will be entirely dedicated to them whatever the nature of the service that Air France-KLM is likely to bring. However, bad news for passengers who do not travel enough to stay Gold. The Silver status will no longer allow priority boarding, baggage delivered first, and priority access to security checks and immigration.
BFM Business (via Google Translate)

Delta Air Lines and KLM Royal Dutch Airlines will launch a codeshare agreement with India’s Jet Airways that brings convenient new travel options for customers flying from Europe and the United States via Amsterdam Airport Schiphol to India and beyond.
Effective March 27, 2016, and subject to government approvals, Delta and KLM customers flying from Europe and the United States to Amsterdam’s Schiphol Airport will be able to connect onto Jet Airways’ new daily flights to New Delhi and Mumbai, with onward destinations that include Hyderabad, Bengaluru, Chennai, Ahmedabad, Kochi, Goa, Kolkata and Amritsar in India; Dhaka, Bangladesh; Kathmandu, Nepal; and Colombo, Sri Lanka.
Delta and KLM codeshare on these Jet Airways routes will provide customers with coordinated customer service, a single ticket and through-check in of bags to their final destinations. Delta SkyMiles and KLM Flying Blue members will be eligible to earn and redeem frequent flyer miles on codeshare routes operated by Jet.
In addition, Jet Airways will place its code on flights between Amsterdam and 11 destinations in the United States and Canada operated by Delta and KLM. These include: New York-JFK, Newark, Chicago, Washington, D.C., Houston, San Francisco, Los Angeles, Vancouver, Calgary, Montreal and Edmonton. Jet Airways will also codeshare on KLM-operated flights to 30 European destinations beyond Amsterdam including Madrid, Zurich and Milan. KLM’s service between Amsterdam and New Delhi also forms part of this agreement.
“Delta is committed to offering customers greater choice and a high standard of service. By partnering with Jet Airways, India’s preferred premier full service, international network airline, we will be able to meet demand for flights to India and beyond,” said Nat Pieper, Delta’s Senior Vice President – Europe, Middle East and Africa. “We have a track record of building successful partnerships with international carriers that broaden our global network and we are delighted to be opening up the Indian subcontinent to the many thousands of Delta customers wanting to fly to this region.”
Pieter Elbers, KLM president and CEO, said: “The co-operation with Jet Airways is another milestone in our unique global flight network from Amsterdam Airport Schiphol. This strategic step will deliver significant benefits to our business and provide KLM customers with exclusive travel opportunities. Plus we will strengthen our presence in the Indian domestic region and their neighbourhood.”
Cramer Ball, Chief Executive Officer, Jet Airways, said: “Jet Airways’ new services to Amsterdam and partnership with KLM and Delta demonstrates our continuous endeavour to provide greater choice and connectivity to our guests. With Amsterdam Airport Schiphol as our new European gateway, we will be able to provide our guests with one stop access to a wider array of destinations across Europe and North America together with our partners KLM and Delta. Jet Airways’ award winning service on board the state-of-the-art Airbus A330-300 aircraft from Mumbai and Delhi to Amsterdam offers a great proposition for our guests flying to Europe and North America.”
Delta and KLM offer up to 19 peak-day services to Amsterdam’s Schiphol Airport from 21 destinations in the United States and Canada. For further information and to book flights between the United States and India, customers may log onto delta.com or klm.com.
Delta Air Lines 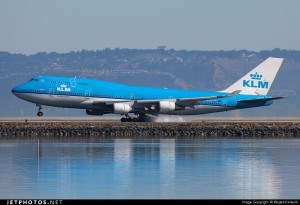 The airline announced today, Oct. 1, the discontinuation of their non-stop flight between Fukuoka and Amsterdam. The last flight will be on Jan. 5, 2016. Reasons for the cancelled route include the weak Japanese yen and decrease in Japanese passengers travelling to Europe in the wake of incidents of terrorism and political unrest. The route began service in April 2013 with three or four flights per week. It is the one and only direct route to Europe from Fukuoka.
Fukuoka Now