An Air France flight bound for Paris was diverted to Montreal last night after an anonymous threat was received, airport officials confirmed.
Flight 083 from San Francisco made an unscheduled stop in Montreal just after 11:20 p.m. ET, said Francois Asselin, a spokesman for Aéroports de Montreal.
Air France confirmed around 4:45 a.m. that the threat was a false alarm.
The plane left for Paris around 6 a.m.
“We were told we had to be diverted for operational reasons by the captain,” passenger Thomas Serval told CBC News. “We were anxious when we landed safely.”
The Boeing 777-300ER was carrying 231 passengers and 15 staff members. The pilot decided to land in Montreal out of precaution, and the plane stayed on the tarmac for some time with passengers on board.
Police and firefighters were called to the scene at Pierre Elliott Trudeau International Airport, according to standard procedure.
Gilles Raymond told The Associated Press that he and his fellow passengers spent at least an hour on the plane during verifications after being originally told the diversion was for “technical reasons.”
“Everyone is pretty relaxed,” Raymond said while still inside. “There was no panic, no stress. Everyone is waiting in their seats. Some people are sleeping, and some are checking their phones or eating ice cream that the flight attendants gave them.”
It is not the first time the airline’s flights have been diverted since the Nov. 13 attacks in Paris that killed 130 people and left hundreds injured.
On Nov. 17, flights bound for France were diverted to Halifax and Salt Lake City, Utah due to anonymous threats later found to be baseless after a sweep of the planes.
CBC News

In line with its tradition of defending contemporary art and modern creation, Air France has decided to once again team up with New York-born painter/graffiti artist JonOne of Dominican origin, famous for his totally original fusion of street art and painting.
After completing the work Air France Forever celebrating the Company’s 80th anniversary, the artist has completely reworked the accent, symbolizing the Air France brand.
On 10 November 2015, at the heart of Air France Industries’ hangars at Paris-Orly, the Company will unveil this giant accent measuring 4 metres by 7 metres on a Boeing 777 equipped with the Company’s latest new long-haul travel cabins in the presence of JonOne. This exceptional work of art represents the French flag and symbolizes freedom, one of the values held dear by France and the artist alike, while echoing the company’s slogan: Air France, France is in the Air.
The aircraft, sporting this exceptional livery, will then fly off for the first time to New York, a legendary city for two reasons – for the artist, who was born there, and for Air France, which has made it a historic route. This will be an opportunity for JonOne to meet Air France customers and tell them all about his original work of art. The aircraft will serve Air France’s global network for one year. This exclusive event has been made possible with the support of Boeing.
On arrival in New York, the artist will sign another exclusive new work of art for Air France, which can be seen early 2016 in the Company’s lounge located in Terminal 1 at New York-JFK Airport, exclusively reserved for La Première, Business and Flying Blue Elite Plus customers.
In December 2015, on airfranceshopping.com a selection of exclusive items with the Air France accent redesigned by JonOne (notebooks, tote bags and models of the Air France Boeing 777) will be available.
Air France

At a hangar at Orly Airport in Paris, Air France officials and journalists watched as the wrapping came off the Boeing 777. Below was the kind of painting one can sometimes see on the subway. Peeling back the masking paper was the artist, JonOne whose career began painting graffiti and subway cars in New York City.
At a party to celebrate the airline’s eightieth birthday last year, JonOne, the Dominican-American now living in France, took out a white piece of paper and began to draw. The sketch turned into a large original canvas which he offered as a gift to Air France. One year later that painting, titled Air France Forever, has been reworked into a 4-by-7 meter banner that reimagines the airline’s red tail-shaped logo infusing it with the colors of the French flag.
“We had this crazy idea to paint a plane,” JonOne told reporters in the moments before displaying his work. At first, he said, the idea seemed incredible.
“Yeah we’re going to paint a plane someday for Air France. That seems like painting a rocket or going to Mars or something like that. But today you’re going to see that crazy idea coming to life.”
The plane, with the registration F-GSQI has been in the Orly hanger undergoing a complete cabin refurbishment, including the installation of new seats in all cabins; 216 in economy, 24 premium economy, 50 business class and four in first class. Adding the JonOne banner was a project that took seven months of planning according to Xavier Malavergne, manager of hangar maintenance. A number of the mechanics who worked on the project were on hand to watch the unveiling on Tuesday.
As the paper came off, the red, white and blue slashes were revealed, crossing from top to bottom across both sides of the aft end of the jetliner. Next to that was the unmistakable signature JonOne, scrawled in black.
JonOne’s work is bold and playful, depicting movement, power and thrust. But this is no Hello Kitty phenomenon where travelers plan their trips around the flight schedules of planes bearing the cat-inspired livery of Taiwan’s Eva Airlines. On Hello Kitty flights everything is part of the show. Special meals are served on special tableware, butter pats and even toilet paper are embossed with the kitty’s mug and ancillary products are sold by the litter.
The amount EVA pays to Sanrio Company for the right to use the Hello Kitty brand on seven airliners is believed to be hefty. The carrier won’t say what it costs.
Air France does not expect JonOne’s art to sell airline tickets like the kitty does, but Jean-Charles Trehan, the airline’s director of communications says, “There’s a marketing benefit for sure.”
Still, unlike Eva Air and Sanrio, Air France got the work of JonOne for free, both the banner and the painting on which it was based. The airline has history of supporting art, by featuring the work of contemporary artists in its lounges, on menu cards and in special in-flight entertainment programs. Trehan says this is the first time Air France has placed art on the livery of any airplane. It may be the first airline to be given the right to use art without a fee or a licensing agreement.
“Absolutely no money” was involved, Trehan said. “It is not in the spirit of the partnership. It is only a matter of friendship.”
The arrangement is not completely without financial benefit. Passengers who like the painting will be able to purchase livery-themed accessories. Tote bags, notebooks and a special edition model Boeing 777 are all for sale from the Air France store.
At 52, JonOne is old enough to remember when flying was for a certain elite set. That’s all changed and to some extent his art reflects the 21st Century traveler. “To see my art means a lot for me and for a lot of other people,” he said.
Who might those people be? “Young people, people who love art, who love travel, inspired people,” Trehan said. JonOne’s cachet could be something that attracts these travelers.
Airlines frequently partner with well-known creatives in an attempt to blend and expand their circles. Even without the exchange of money the same kind of transaction is going on here. Air France gets a stop-people-in-their-tracks work of contemporary art to fly around the world and JonOne gets to show off his unique view of his adopted home everywhere Air France flies.
If the barter is good for business, so much the better.
Runway Girl Network

A graffiti artist decorates a Boeing 777 of Air France
The New York painter JonOne revisits the comma-shaped logo of Air France cabin on a long-haul aircraft. Collage of his work takes place on Tuesday in a hangar at Orly.
On Tuesday, the flamboyant New Yorker glue his work on the fuselage of a Boeing 777 of the company in Orly shed. After performing the work “Air France Forever on the occasion of 80 years of the Company (2012), the artist has captured the essence to revisit focus, symbol of the brand Air France, in the urban way and contemporary.
The plane, with this unique livery, will be inaugurated on the occasion of a trip Paris-New York, a historic line of Air France.
In 2012, premium customers had discovered during their visit to the La Première lounge of Terminal 2E of Paris-Charles de Gaulle signed exclusive creations and works JonOne like a sculpture and a blue LED tag of 1.50 m fiberglass . On board long haul flights of Air France, still in La Première cabin, blankets menus and wine lists were customized.
La Parisienne (via Google Translate) 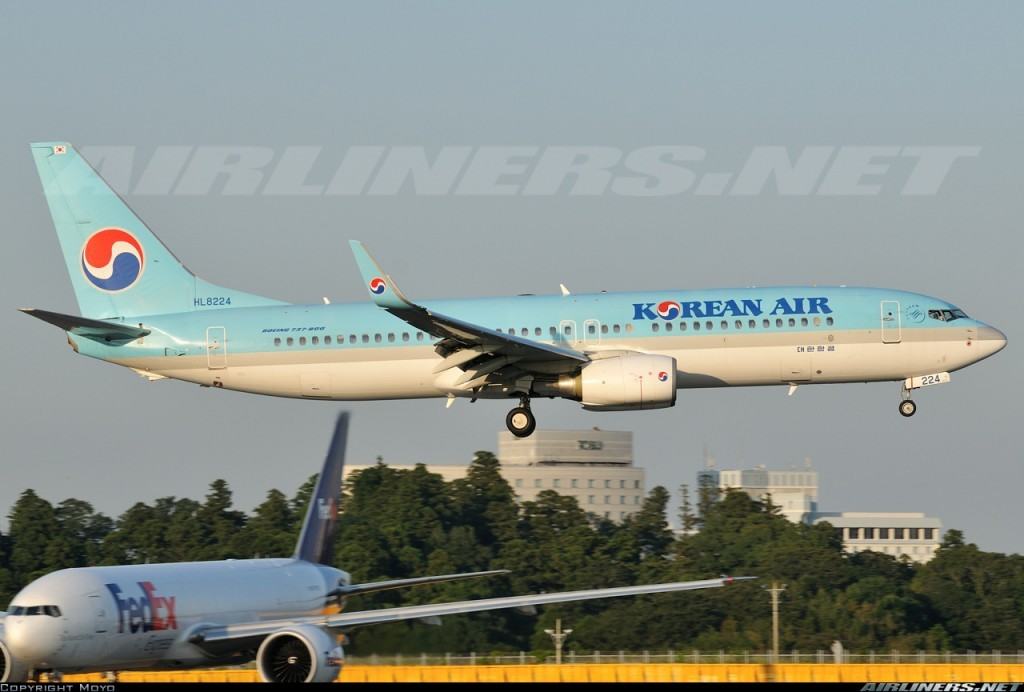 SEATTLE, Nov. 5, 2015 /PRNewswire/ — Boeing [NYSE: BA] and Korean Air today finalized the airline’s order of 30 737 MAXs and two additional 777-300ER (Extended Range) jetliners valued at nearly $4 billion at current list prices. The airline also has options for additional 737 MAXs as part of the order, which was previously announced as a commitment during the Paris Air Show in June.
With this order for up to 52 Boeing airplanes, Korean Air becomes Boeing’s newest 737 MAX customer and now has 62 firm Boeing airplane orders on backlog.
“Korean Air is a valued Boeing customer and today’s order is the culmination of our longstanding partnership that spans over four decades,” said Boeing Commercial Airplanes President and CEO Ray Conner. “Korean Air has been a pioneer in Asia’s commercial aviation industry and today, we are truly honored to welcome Korean into the new 737 MAX family. I am confident these new airplanes will play an important role in Korean Air’s fleet modernization program for many years to come.”
As part of this order for 737 MAX airplanes, Korean Air also adds another two 777-300ERs as it continues to modernize its long-haul widebody fleet.
Korean Air currently operates a fleet of 91 Boeing passenger airplanes that consist of 737, 747 and 777 models. The airline also operates an all-Boeing cargo fleet of 28 747-400, 747-8 and 777 Freighters.
Korean Air’s Aerospace Division is a key Boeing partner on both the 747-8 and 787 programs, supplying the distinctive raked wing-tips for each model. They are also one of two suppliers producing the new 737 MAX Advanced Technology (AT) Winglet.
The 737 MAX incorporates the latest technology CFM International LEAP-1B engines, Advanced Technology winglets and other improvements to deliver the highest efficiency, reliability and passenger comfort in the single-aisle market. Beginning in 2017, the new single-aisle airplane will deliver 20 percent lower fuel use than the first Next-Generation 737s and the lowest operating costs in its class – 8 percent per seat less than its nearest competitor. With broad market acceptance, the 737 MAX has 2,929 orders from 60 customers worldwide.
The 777-300ER is one of the most fuel and cost-efficient airplanes in its class as well as the most reliable twin-aisle aircraft in the world. It also has the highest cargo capability of any passenger airplane in service. The 777-300ER will receive further improvements in 2016 designed to reduce fuel use by 2 percent. The flagship of the world’s elite airlines, the 777-300ER carries 396 passengers in a standard two-class configuration up to 7,370 nautical miles (13,650 kilometers), on non-stop routes. Korean Air has configured its 777-300ER with a seating capacity of 277 passengers in a three-class configuration.
Korean Air, with a fleet of 166 aircraft, is one of the world’s top 20 airlines, and operates more than 430 flights per day to 128 cities in 45 countries. It is a founding member of the SkyTeam alliance, which together with its 20 members, offers its 612 million annual passengers a worldwide system of more than 16,000 daily flights covering 1,052 destinations in 177 countries.
Boeing