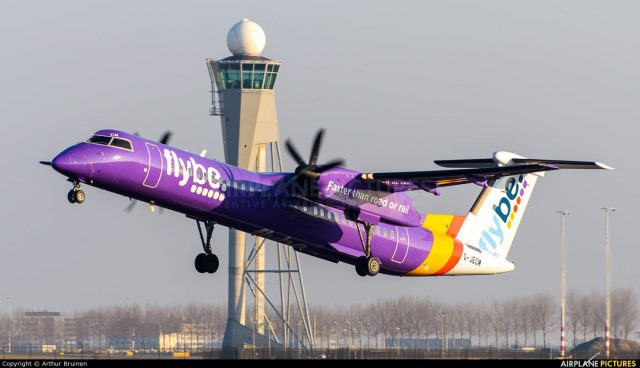 Regional airline Flybe is launching two new routes connecting Scotland with London Heathrow airport.
Flybe will offer more than 40 scheduled flights a week from Aberdeen and Edinburgh to Heathrow, which it says will compliment its existing services to London City airport.
The route expansion means with effect from March 26, Flybe will offer up to 18 flights a day between London and Edinburgh, and 10 a day between London and Aberdeen.
The London Heathrow slots have become available as a result of British Airway’s parent group International Consolidated Airlines Group (IAG) acquiring bmi in 2012.
The European Commission approved the deal on condition IAG gave up 14 pairs of daily take-off and landing slots at Heathrow in a bid to boost competition.
Flybe is not required to pay to use the slots, other than meet Heathrow landing and passenger charges, and the slots will not be purchased by Flybe and will not be added to the balance sheet.
The airline said it will be using Heathrow’s Terminal 2 to offer ‘One Stop to the World’ connectivity to its codeshare and interline partners.
Flybe’s executive chairman, Simon Laffin, said: “We are delighted to announce our first flights to London Heathrow, significantly enhancing our UK domestic route network and offering even better links between Scotland and London.
“The new routes to Heathrow complement the existing ones we operate to London City, and will benefit our business customers and customers in Scotland who want to connect with our long haul codeshare partners.
“Flybe is the leading airline serving UK domestic passengers and these new services position us well to serve our passengers in both Scotland and the South East.
“We have long been lobbying for Heathrow to offer more opportunities for domestic flights to enhance regional connectivity.
“Whilst other operators may have dismissed the possibility of further domestic routes into Heathrow, we look forward to working with the airport to further expand the range of domestic destinations.”
The Scottish Government backed plans for a third runway at Heathrow in October, believing the expansion plan offers “the greatest strategic and economic benefits to Scotland”.
Heathrow and the Scottish Government entered into a Memorandum of Understanding in October, which includes a range of commitments from Heathrow, including a reduction in landing charges for airlines operating services from Heathrow to Scotland by £10 per passenger from January 2017.
Commenting on the new Flybe routes, Cabinet Secretary for Economy, Jobs and Fair Work, Keith Brown, said: “This is very welcome news and encouraging evidence that the reduced passenger charges we pushed for, and which are covered in our Memorandum of Understanding with Heathrow Airport, are starting to have a real impact on services.
“Over time, we fully expect this and other elements of the MoU to bring about further improvements in Scotland’s connections to Heathrow and beyond.
“We spoke to a number of airlines to highlight the opportunities which these remedy slots bring.
“By taking them up, Flybe brings competition back to the routes from Heathrow to Edinburgh and Aberdeen.
“This can only be a good thing for passengers between Scotland and London.
“It’s also good news for Edinburgh and Aberdeen Airports too, in terms of the choice they can offer their customers.
“We will work with both Flybe and Heathrow to make sure these services are a success and I look forward to the flights taking off next year.”
Heathrow chief executive, John Holland-Kaye, said: “Improving the connections into Heathrow from all around the UK will be vital in helping to secure the economic future of communities in every corner of the nation.
“Today’s announcement shows that the measures we’re introducing, such as the £10 reduction on domestic passenger charges, are already working to secure vital links.
“More airlines flying routes to Scottish airports means more flights, more competition and choice for families, and more visitors to Scotland.
“With Flybe based at Terminal 2, it also means new, unique direct access from Heathrow to markets such as Colombia, Taipei and Auckland – meaning more opportunity for Scottish businesses looking to reach new export markets.”
Flybe moved its Dundee to Amsterdam direct flight service to Edinburgh in October as part of a wider review of its operations at Dundee Airport.
The airline confirmed earlier in the month, since the service was switched to Edinburgh, “it has not been in receipt of any funding from the Government’s Regional Air Connectivity Fund”.
Last month Flybe terminated its long-running franchise agreement with Scottish airline Loganair in August 2017 after failing to agree new commercial and operational terms.
Loganair, who have operated under franchise agreements for 24 years, said it will operate services “in its own right” from September 1, 2017 and under its own brand name.
Daily Record