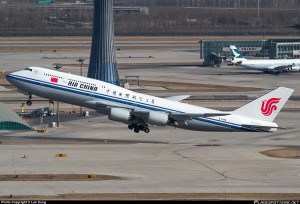 Air China announced on Tuesday that it will launch its new route to connect Beijing with Islamabad and Karachi in Pakistan.
The launch ceremony themed Silk Road in the Air was organized in Islamabad and attended by Pakistan’s defense minister, Khawaja Muhammad Asif; the Chinese ambassador to Pakistan, Sun Weidong, business representatives and other officials from the two sides.
Addressing the ceremony, Air China’s general manager in Islamabad, Hu Haitao, said the Chinese flag carrier would start the new service on Oct. 26.
Want China Times

Wednesday, October 14, 2015 – Islamabad—National flag carrier of China, Air China which has been operating in Karachi (from Karachi to Beijing) for last 22 years is now all set to stop over in Islamabad and take passengers from here too. On October 26, the Air China’s new “Air Bus” will be arriving in the airs of Islamabad to take passengers on way to Karachi and then Beijing. This will be the second time the Air China plane will be landing in Islamabad this year as earlier in April, China’s President Mr Xi Jinping also visited Pakistan by Air China flight.
For Islamabad, initially, three flights are schedules: Monday, Wednesday and Friday and later with the growth of business activities and exchange of workers contractors and businessmen owing to momentum of work on the China Pak Economic Corridor (CPEC) more flights may be scheduled. This was announced by the General Manager of Air Chin Islamabad station, Mr Hu Hi Tao at the formal launch of the Air China operations from Islamabad. General Manger Air China Karachi Station Hao Yu Dong was also there to extend full moral support to his Islamabad’s counterpart.
Defence Minister Khawaja M Asif, Chairperson Benazir Income Support Programme Marvi Memon and a friend of Pakistan Ambassador of China Sun Weidong were also there to witness a new chapter of enhanced business activities between the two countries. Khawaja Asif referring to the CPEC termed the Air China’s decision to start flights from Islamabad a good pragmatic step. I can foresee a large number of passengers travelling between the two countries in the days to come as the work on economic corridor picks up momentum, he said. China is Pakistan’s trusted friend and both the countries have stood the test of time in all odds and unpredictable conditions.
Air China, the national flag carrier of the People’s Republic of China keeping the strong friendly ties between the two countries in mind has initiated the major step and I on behalf of the government assured the company full support. We shall facilitate you in all possible ways in making your endeavours successful, said Defence Minister. “We are embarking on a journey of economic development with the start of Pakistan China corridor, he concluded. Ambassador Weidong also appreciated Air China for including Islamabad in its flight route. Air China is a world-class service and meets all the standards of top international flights. I sincerely wish them best of luck and hope Air China’s operations will result in increased bilateral investment and enhance trade and travel, said Chinese envoy.
Speaking on the occasion, Air China, GM Islamabad Hu Hi Tao said new airplanes Air Bus 330-200 is being introduced instead of old narrow Air Bus 320. The new airplanes have 30 business seats and 207 Economy with total 360 seats. About Air China, he told it operates all over the world and is a competitor among the top-ranking airlines of the world. Later talking to Pakistan Observer, a representative of the Air China said in the past we had agreement with PIA to take our passengers from Islamabad to Karachi but now we shall cater to them ourselves. He however did not rule out any future agreement with the Pakistan’s national flag carrier Pakistan International Airlines.
Pakistan Observer